The recent Department for Education proposal on the theory component of the Politics A-Levels raises the question as to what counts as knowledge. The proposal more or less excises women and non-white men from the curriculum and limits understandings of what politics is, who produces knowledge and the type of knowledge that is produced. These questions are not limited to secondary education curricula. They are relevant to undergraduate introductory courses to politics.

How we form young minds matters. What we teach students to consider as knowledge structures and justifies social and political institutions. If we want to create greater gender and racial equality, we ought to reflect on this and what we are doing when we teach political theory. Most first year introduction to political theory courses do consider this. Some courses are structured conceptually and include the study of liberalism, socialism, feminism, multiculturalism and/or post-colonialism. Others approach the study of political thought historically and teach a historical canon of thinkers from antiquity to the present that occasionally includes thinkers outside of the canon. However, these courses do not necessarily include a wide diversity of thinkers and if they do, there is a tendency to classify these thinkers under categories of feminism or post-colonialism, notably in conceptually structured courses. This in turns leaves political theory as the domain of white men; to be sure these thinkers are also classified under labels of socialism, liberalism and conservatism. Yet these categories are of a different order than the issue and identity specific categories of women and race. When we diversify curricula we continue to allot more space and class time to white male theorists than to women or men of colour. Implicitly we reiterate a particular hierarchy even if we are attempting to put thinkers on an equal playing field.

The historical approach is also problematic. It presents a constructed history that tells the story of the development of Western political ideas and often imagines this as a conversation between thinkers that occurs over time where subsequent participants build on what has been said by earlier theorists. This approach is not only exclusivist, but it also purports a sort of (chronological) progression of ideas from the ideal Greek city-state to some sort of liberal democracy. This is not to say that this approach neglects critical voices and alternative views, but rather that these voices are not studied on the same level as those that are part of this historical conversation. Ultimately students are taught that this particular canon embodies knowledge and relates a particular story of progress and development. Indeed upper year university classes challenge and criticize these structures; however, in the first year, a certain formation takes place that is foundational so it is especially important to think, in my view, about these initial classes that provide the building blocks of higher education.

In teaching first year introduction to political theory, I have tried to disrupt these patterns and have integrated more female and political theorists of colour in the syllabus. This year the course began by questioning the canon through reading Charles Mills’ Racial Contract. It then put bell hooks and Aristotle in conversation. This not only questioned the authoritative status of the canon, but it also provided the opportunity to explain how to study ideas either in historical context or across time and space using philosophical and/or conceptual approach. Students were invited to consider how comparing two thinkers who wrote in very different contexts and times could be problematic and to think more widely about history and context. At the same time, students were asked to consider that both thinkers address the same question on the boundaries of the political and hence could be studied together. Juxtaposing Aristotle with a black feminist thinker is a critical statement in and of itself. The comparison worked well as much of Aristotle’s first book of The Politics deals with the household and establishes the power and authority of the male head of household over women, children and slaves. Whereas, bell hooks challenges these hierarchies. Reading the two theorists in tandem enabled students to read Aristotle and hooks critically and to consider how understanding the political and politics differs according to the position, identity and context of each thinker.

We transgressed boundaries in tutorials and in a debate on who should participate in politics, the students played the role of the opposite gender. The women had to defend Aristotle and the men had to defend hooks. The women were able to take on the male perspective easily but the men had difficulty in taking on the female perspective, which might reflect how they have been taught or socialized to think in particular ways. We did a similar type of gender role switching debate when we studied the social, marriage and sexual contracts and again the men had great difficulty articulating and defending the female perspective.

Our course progressed with reading Plato, Hobbes and Locke, which we disrupted with Mary Astell and Carole Pateman on the marriage and sexual contracts. It worked well to put the critical thinking at this juncture both historically as Astell was a critic of Hobbes and Locke and conceptually as Pateman’s critique is valid both today and in history, notably with regard to her critique of Enlightenment contract theorists. Students were able to understand problems of consent to a contract in a critical light. Additionally, we touched upon questions of education: Who gets educated? How are they educated and with knowledge? Who produces that knowledge? And, finally, how does this particular knowledge socialize people, set norms and hold disciplinary power over society at large? Consideration of these sorts of questions brings to the fore a more self-reflective approach to the study of political theory as it invites students to think of what they are being taught and how they are being formed.

It was useful to put these two women before reading Rousseau for the students have taken a far more critical view of his conceptualization of equality, freedom and his portrayal of women in the state of nature and the state. It has made it easier for the students to understand that inequality is not natural but artificial constructed through political and social norms. In the second term, we will be studying Fanon, Thoreau, Gandhi and Catharine MacKinnon amongst Marx, Nietzsche and Foucault. In previous years, we have studied W. E. B. Du Bois alongside Thoreau and Gandhi and showed how political ideas travelled from the US to India and back to the US, for example. Thus students are exposed to comparative political theory and can see how ideas move across time and space. In addition, many of these thinkers deal with concrete political problems regarding domination, consciousness, self-determination and resistance which students study both in the texts as well as in the (frequently activist) contexts in which they were developed. Hence students develop an understanding of the performativity of politics that goes beyond the ideal notion of the political animal participating in decision-making in the political realm.

My primary intention in teaching a variety of thinkers was to make the course more diverse and open. I paired Aristotle and hooks because I wanted to open the study of politics with questions on the political, participation and citizenship. Although this opening makes a statement against the traditional canon and challenges the authority and status of these thinkers, I do not wish to deny that the rigorous thinking and philosophy of many key thinkers is not worthy of learning and being taught. To understand either Plato’s or Hobbes’s epistemologies is key to understanding how we know the world and how we approach this. Rather what I do want to argue is how we frame the teaching of these key thinkers in relation to other thinkers and the discipline of political theory itself is important for it shapes the foundations students acquire and I believe it needs to be rethought out to reflect the conceptually diverse world we inhabit. Teaching political theory in the contemporary world based on the canon either presented historically or conceptually does not reflect our reality, diversity, new and critical ways of thinking. An introductory course ought to capture this diversity and openness rather than reiterate patterns that reinforce racial and gender inequality. The questions raised by women and men of colour are about the political, its boundaries, knowledge, power, freedom, equality, structures and institutions. In other words, they are about political theory writ large and by pushing the boundaries they question what political theory is and ask why it is exclusive.

Overall, the students have been very engaged. They have had passionate debates inside and outside the classroom and the self-reflective quality of such teaching is mirrored in their capacity to think about what it is they are learning and why, who has produced the knowledge they learn and from what perspective and why. It provides particular tools and understandings critical to the study of politics including what is politics, power, knowledge, justice and the state from a variety of perspectives. 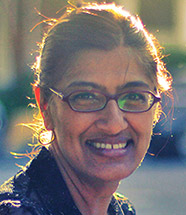 Dr. Manjeet Ramgotra is Senior Teaching Fellow in the Department of Politics and International Studies at SOAS, University of London.