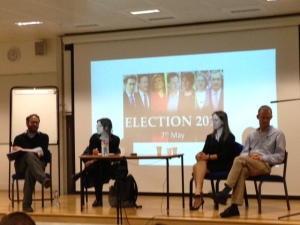 On Friday 15 May, the PSA Women and Politics Specialist Group and the Political Leadership Specialist Group – supported by Birkbeck and Canterbury Christ Church University – co-hosted a workshop on ‘Women, Gender and Political Leadership’. The increasing prominence of female leadership and recruitment, ranging from the UK General Election debates to the US Presidential race, has given the study of gender and political leadership a new urgency and importance. This one-day event – organised by Dr. Mark Bennister (Canterbury Christ Church), Dr. Meryl Kenny (Leicester), and Dr. Ben Worthy (Birkbeck) – brought together 40 participants to explore this under-researched area, examining in detail the challenges for women in office and the means by which they can attain it.

The event also featured a plenary roundtable with Professor Tim Bale (QMUL), Dr. Rainbow Murray (QMUL) and Dr. Rosie Campbell (Birkbeck), reflecting on the 2015 General Election (pictured above). This roundtable is available as a podcast: http://backdoorbroadcasting.net/2015/05/women-gender-and-political-leadership/ Plans are underway to follow up the workshop with further events and panels, as well as academic outputs, and PSA members interested in this research agenda are recommended to contact either of the Specialist Groups to get involved.